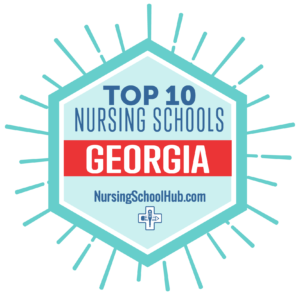 A two-year community college could also be an option as these are often less expensive than four-year schools. An associate’s degree can be obtained in two years or less and those credits can be carried to a four-year school. A bachelor’s degree is needed to become a registered nurse. A master’s is needed for specializing, and a Ph.D. is required to teach nursing.

How We Ranked the Best Nursing Programs in Georgia

The editors of Nursing School Hub have ranked the best schools for nursing in Georgia according to factors that help prospective students determine the value of their degree. Programs are ranked by tuition, student satisfaction, and the variety of options.

Mercer University, as one of the best schools for nursing in Georgia, offers a variety of CCNE-accredited nursing degree programs. Among these available nursing programs offered by Mercer’s College of Nursing are a BSN (traditional or pre-license track), an RN to BSN online track, an MSN (Family Nurse Practitioner or Adult-Gerontology Acute Care NP) as well as a DNP (Doctor of Nursing Practice) or Ph.D. in Nursing, plus a graduate statistics course. The DNP and Ph.D. nursing degrees are available through a hybrid delivery of coursework.

Founded in 1833 as a private institution of higher education, Mercer University is a multiple campus school with facilities in Macon, Atlanta, and Savannah. Mercer University’s campuses serve approximately 9,010 students.

Highlight: Mercer University’s Phi Beta Kappa is recognized among the oldest of all collegiate honor societies.

Kennesaw State University’s Wellstar College of Health & Human Services offers various nursing programs from what is ranked among the best schools for nursing in Georgia. Kennesaw State University’s nursing degrees include a Bachelor of Science in Nursing (BSN) degree (either a traditional track or an accelerated track), a Master of Science in Nursing degree (MSN in Nursing Education, Nursing Administration or a Primary Care NP), and a Doctor of Nursing Science (Hybrid DNS) degree program.

Kennesaw State University is a research higher learning institution that was founded in 1963. This space-grant university is a member school of the state’s university system that serves approximately 37,250 students on its Kennesaw and Marietta campuses.

Georgia State University’s School of Nursing offers a variety of nursing programs that include associate degree through doctoral program options. Recognized among one of the best schools for nursing in Georgia, Georgia State University offers several bachelor’s level nursing degrees that include an online RN to BSN bridge program and a traditional BSN track. GSU also offers an RN to MS bridge program plus two doctoral level degrees – a DNP – a Doctor of Nursing Practice & a Doctor of Philosophy (Ph.D.) in Nursing Program.

Highlight: Georgia State University holds the distinction of being the largest university in the state of Georgia. 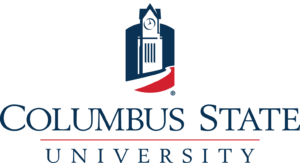 Columbus State University was founded in 1958 as a junior college; however, it now operates as a public university and is also a space-grant institution of higher education. CSU’s suburban campus covers more than 100 acres and serves approximately 7,750 students. 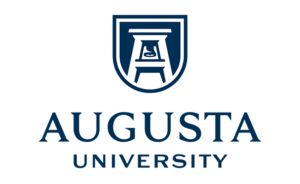 Augusta University’s College of Nursing offers a multitude of nursing programs and is one of the best schools for nursing in Georgia that is also nationally-ranked. AU’s Bachelor of Science in Nursing program is available to high school seniors or full-time students on-campus. Augusta University’s graduate degree programs in nursing include an MSN – Clinical Nurse Leader and several DNP and Ph.D. in Nursing programs. Several doctoral programs are available to those RNs who hold a BSN, while other doctoral level programs require the RN candidate to have a Master of Science in Nursing (MSN).

Highlight: Augusta University’s campus in Summerville was once a US army arsenal in the early 1800s.

Georgia College & State University was established as an industrial and teacher’s college in 1889. Georgia College is a member school of the state’s university system with a student enrollment of approximately 6,850 students. 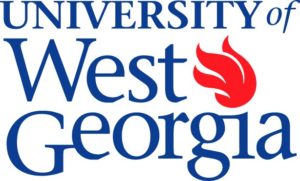 The Tanner Health System’s School of Nursing within the University of West Georgia offers a variety of nursing programs from one of the best schools for nursing in Georgia. UWG’s nursing degrees include a traditional BSN program plus several online nursing programs. The fully online nursing degrees from the University of West Georgia include an MSN degree, a Nursing Education Certificate, an RN to BSN transition, plus a Doctor Education with a Nursing Education major programs.

Highlight: US News recognizes the University of West Georgia’s online nursing programs among the top 35 in the nation.

Emory University’s Woodruff Nursing School is among the best schools for nursing in Georgia, offering traditional, accelerated, and online programs at the bachelor’s, master’s, and doctoral levels. The BSN programs are open to high school, traditional, and transfer students. In addition, Emory’s nursing programs offer an accelerated option at the baccalaureate or master’s level. Emory’s MSN degree programs offer nine APRN academic tracks from which to choose, plus several dual degree plans for interested students. Doctoral degrees in nursing are offers as DNP, DNP for Nurse Anesthesia, or a Ph.D. in Nursing (Doctor of Philosophy).

Highlight: Emory University holds the distinction of being the second oldest of all institutions of higher education in the state. 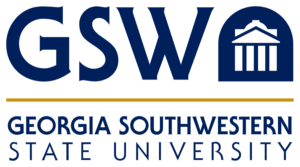 Highlight: Georgia Southwestern State University is a member school of the University System of Georgia.

The Nursing School at Georgia Southern University offers several CCNE-accredited degree programs from what is considered as one of the best schools for nursing in Georgia. GSU’s BSN programs are offered in a traditional format and an advanced placement track (for LPN/LVNs), or an accelerated track. Additionally, GSU offers an online RN to BSN option, plus several MSN degree programs (Nursing Education or Chronic Care Management) and DNP degree options for those who hold an APRN license.  GSU’s DNP is a hybrid delivered program that can be completed in only six semesters.

Georgia Southern University (Georgia Southern) was established in 1906 and is a space-grant institution of higher education. As a member school of Georgia’s university system, Georgia Southern’s campuses are home to approximately 25,950 students.

Highlight: Georgia Southern University’s flagship campus in Statesboro is about two hours from Macon and about an hour from Savannah.

How Do I Choose a Nursing School in Georgia?

Most schools also require some clinical training, so it is a good idea to add that to your considerations. Either find one you can fit into your lifestyle, or change yourself to fit the program. Knowing what you want going in will go a long way in making the best selection among the best nursing schools in Georgia.

How is the Nursing Job Market in Georgia?

Now is a great time to be a nursing student, or looking for nurse jobs in Georgia.  A state nursing organization says there is a very high demand now due to a growing population and a lot of nurses retiring.  One nursing administrator said there have been shortages before, but this one could be the worst.

A national nursing organization ranked Georgia sixth in demand for nurses through 2030. It is projecting a demand of 101,000 nurses and having 98,000 available. That leaves a shortage of 2.200. Georgia nursing jobs are in great demand, and nurse jobs in Georgia are expected to continue to be available. Nursing shortages always mean more travel nursing jobs in Georgia as well.

How Much Do Nurses Make in Georgia?

Georgia is a state of contrasts, with the major city of Atlanta, and a lot of rural areas, so there is a lot of variety when it comes to Georgia.

Nurses in Georgia average $69,000 per year, which is 40 percent higher than the average of all other professions in the state, according to an article in the Atlanta Journal-Constitution. The article also noted Georgia’s registered nurse salary is good when compared to the cost of living. A person with a Georgia nurse salary must work 29.5 hours to meet basic housing needs, while the national average is 42.3 hours.

The starting salary for registered nurses in Georgia is $53,000 for the entire state, and a little higher in Atlanta. Nurses in rural areas start at around $49,000, but a nurse with 20 years of experience in Atlanta could make around $92,000.

Salaries for nurses has climbed steadily in recent years. The average in 2018 was $68,000, and in 2014 it was $62,000, which is a 10.5 percent increase over five years. That trend is expected to continue with a slightly higher percentage in the next few years because of the expected shortage. The average salary for nurses in Georgia could be $76,000 by 2023, which would be an 11.2 percent increase over 2019. Nurses with master’s degrees will make around $6,000 more per year than those with a bachelor’s.