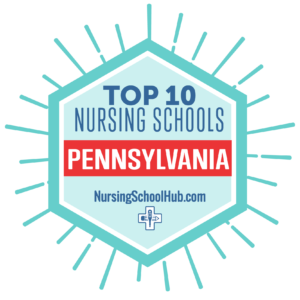 With its dense population and big urban centers, there’s a lot of demand for nurses throughout Pennsylvania, and anyone interested in becoming a nurse in Pennsylvania has some of the best nursing schools in the nation to choose from. Schools in Pennsylvania for nursing can prepare you for any of the specialties of nursing, or to be a registered nurse.

How We Ranked the Best Nursing Programs in Pennsylvania

Nurses need to know their degree will have a real value, so Nursing School Hub features only reputable, accredited nursing schools in our ranking of the best nursing schools in Pennsylvania. We have ranked programs with data from IPEDS and Niche, including tuition rate, student reviews, and graduate salary.

The Nursing School at Duquesne University is one of the best nursing programs in Pennsylvania, offering nursing degrees from the bachelor’s to doctorate level. Duquesne’s nursing school is one of only fourteen schools in the nation that is endorsed by the AHNCC – the American Holistic Nurses Credential Corporation and accredited by the CCNE. Duquesne University offers three paths to a BSN degree – a traditional path, a 2nd-degree path, and a dual degree path that offers a BSN and Biomedical Engineering baccalaureate degree in only five years. The university offers three online programs – a Ph.D. in Nursing, Ph.D. in Nursing Ethics, and an MSN in Forensic Nursing. MSN degrees are offered in six specialties.

Duquesne University of the Holy Spirit (DU) was established as the Pittsburgh Catholic College in the late 1870s. Duquesne University maintains a campus in Pittsburgh and an international location in Rome. More than 9,250 students attend classes offered on the school’s 45+ acre campus or online. 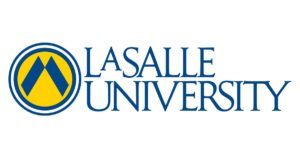 La Salle University was established in the mid-1860s and named to honor St. Jean Baptiste de la Salle. The school is affiliated with the Christian Brothers Roman Catholic Church and severs more than 5,050 students. La Salle University is organized into three primary colleges/schools in the areas of business, nursing & health sciences, and arts/sciences – with programs available online, on-campus, or hybrid delivered.

Drexel University was established in the early-1890s by financier Anthony Drexel. This private research institution of higher education serves a student body that exceeds 24,150 undergraduate and graduate students from its Philadelphia campus and online. Drexel University is well-known for its cooperative education programs that allow for 1.5 years of paid employment.

The University of Scranton was established in 1888 and administered by the Lasallian Brothers until the early 1940s when the Society of Jesus begin managing the school. More than 5,350 students attend classes on the school’s urban campus or online. The University of Scranton offers about 100 undergraduate and graduate degree programs on its distance learning platform and on-campus.

Cedar Crest College was established by the United Church of Christ as an all-women’s school but operates on an independent basis academically and allows men to pursue various degree and certificate programs. The college’s suburban campus in Allentown is home to approximately 1,900 graduate and undergraduate students. Cedar Crest College offers more than 50 academic majors through its various baccalaureate degree programs.

The Nursing Department at Messiah University is among the best nursing programs in Pennsylvania, offering an array of CCNE-accredited nursing programs. Messiah University offers a traditional BSN and an RN to BSN degree. In addition, Messiah University provides students with MSN degrees (with concentrations in nurse educator and nursing administration), a dual MSN with an MBA degree, and a Doctor of Nursing Practice in Nursing Leadership and Family Nurse Practitioner. Finally, MU offers two post-BSN certificates in nursing management or nursing education.

Carlow University is recognized to be one of the best nursing programs in Pennsylvania, offering a four-year BSN, a 2nd career BSN, or an online RN to BSN degree program, plus a variety of graduate-level degrees that are available on-campus and online. Carlow University’s MSN in Education & Leadership, Women’s Health, and Family Nurse Practitioner are available entirely online or on the school’s Pittsburgh campus. Additionally, the Doctor of Nursing Practice (DNP) is available online, as is the MSN – Master of Business Administration dual degree program.

Carlow University was established in 1939 by the Sisters of Mercy – Roman Catholic Church. The university is organized into three colleges/schools that offer its 1,300+ students degrees in health & wellness, leadership & social change, or learning and innovation. Carlow University maintains three local campuses – the Greensburg, Cranberry, and Oakland campuses. 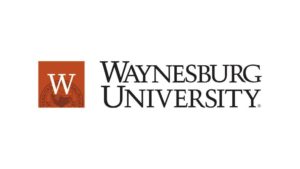 Waynesburg University’s Nursing Program offers, as one of the best nursing programs in Pennsylvania, a BSN degree – a Bachelor of Science in Nursing degree (BSN) program, an RN to BSN degree, a BSN for 2nd degree students, and Master of Science in Nursing degree program that are both CCNE accredited. Nursing students have a 100% pass rate on the NCLEX-RN exam for eight years since 2008. College Factual recognizes Waynesburg University as the best value school in the Commonwealth of Pennsylvania.

Waynesburg University is a private institution of higher education that was established by the Presbyterian Church in 1850. The university’s suburban campus in Waynesburg, Pennsylvania (the most southeastern county in PA) is home to approximately 1,750 undergraduate and graduate students and is located roughly fifty miles from downtown Pittsburgh. Waynesburg University offers students nearly 75 academic concentrations from which to choose.

How Do I Choose a Nursing School in Pennsylvania?

Some junior colleges offer an introduction to nursing programs, and some have nursing assistant programs and LPN programs that can be completed. The programs can build on each other. A junior college certificate will likely be transferrable to a four-year school, and you will have already completed some requirements for an RN, To become an RN you will need a four-year degree and a nursing program. Advanced nursing beyond that requires a Master’s degree. Credits are transferable in state institutions, but make sure the college you are considering has that option as well. Find out about internships and practical training that is normally required by employers.

Any of the Pennsylvania nursing schools would allow you to earn the degree you need to get a job as a nurse. Finding the one that fits you best is the harder part.

How is the Job Market for Nurses in Pennsylvania?

The area around Philadelphia has the fourth-highest number of registered nurses of all the metropolitan areas. There are 70,000 RN’s in that area. Among the top 10 metropolitan areas, RN’s in Philadelphia is seventh in the level of pay. The Bloomsburg-Berwick metropolitan area has the largest concentration of Pennsylvania nurse jobs with 2,880 jobs. That area is far above the national average in the percentage of the population employed in the medical field.

Travel nurse jobs in Pennsylvania are always needed when there is a shortage of nurses. Nurses with Pennsylvania travel nursing jobs fill in at hospitals and other facilities. Jobs for travel nurses are expected to increase by 16 percent until at least 2024. Travel nurses have a lot of flexibility, including how many hours they work. This results in a lot of variance in salaries.

How Much Do Nurses Make in Pennsylvania?